The following is a description of Hackfall from “The Tourists Companion” which was first published in 1818. The photographs include some colour pictures taken in 2006 and photographs which are approximately 100 years old.


To Hackfall’s calm retreats, where nature reigns In rural pride, transported fancy flies. Oh! bear me, Goddess, to these sylvan plains, Where all around unlaboured beauties rise.

This sequestered and romantic Spot is the property of Mrs LAWRENCE, distant from Masham 3 miles, from Ripon 7, and from Bedale 9. It consists of two deep Dingles, covered on either side with a profusion of Wood, except in such parts where the naked Scars contribute to vary and improve the View, a small stream running through is obstructed in various places by upright pieces of stone, and thus forms several artificial cascades.

The Buildings are Pavilions, covered, with seats, from the first of which is a view of the Great Fall, divided into two parts, which, as DAYES observes, “rather steals than dashes down rocks richly clad with moss and possesses a mildness and beauty peculiar to itself;” artificial Ruins, a small Octagon room, built of Petrifactions, called Fisher’s Hall: 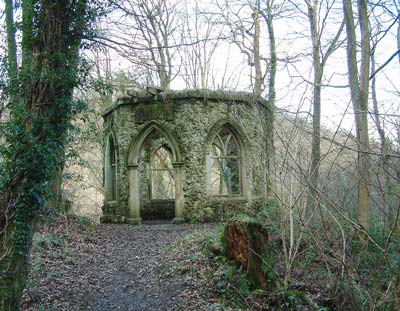 Fast by this stream, and in the thickest shade A straw roof’d cot appears, with ivy bound, The walls wilt shells, and varied moss o’erlaid, And rough hewn altars mark the hallow’d ground.

a Grotto, situated in front of a Cascade which falls forty feet, a Rustic Temple, on the margin of a Sheet of water, in the middle of which there was formerly a Fountain throwing Water to a great height, are bounded by a noble Amphitheatre of tall Trees, which, though rather too formal for the surrounding Scenery, have a pleasing effect. 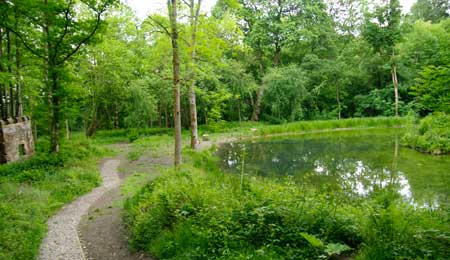 The Walks are laid out with great judgement and much taste, which, as you ascend, exhibit several Views of Masham Church and Town, &c. but the best Views are from Fisher’s Hall, which commands the whole of the two Dingles, where they fork from each other with the bottom of each filled with the rapid river Ure, which here “ boils and foams and thunders through.” The View is perfectly American, for nothing is seen from it but hanging Woods, extensive Scars, and Water. From the Hut, on the margin of the Ure, which winds rapidly at your feet, is seen a small Cascade trickling down the hill, Fisher’s Hall, Mowbray Castle, and at a short distance, the Weeping Rock.

The View from Mowbray-Point, on the brink of a very high Precipice, commands the same woody Dells and Water, as from Fisher’s Hall, but overlooks a vast extent of country, enriched with corn, meadows, and groves, a tract of uneqnalled beauty and exuberant vegetation. From this place may be seen, Tanfield Church, and the Gateway of the old Castle, Kirklington, Burneston, Topcliffe, Thirsk, Craike Castle, York Minster, Whitstoneclifte under the edge of Hambleton, Roseberry-Topping, &c. In the Building are a handsome Dining-room, a small Drawing-room, and a Kitchen, none of which are now in use.

On an eminence, not far distant, says Pennant, are to be seen the remains of Mowbray’s Castlehill, which are unquestionably Roman, a Square defended on one bide by the steep of the Hill, on the other by a Dyke and deep Ditch on the outside.

Notes: In fact what is described as Mowbray’s Castlehill is Camp Hill which whilst almost certainly Roman but had nothing to do with Mowbray Castle which is on the South East edge of Kirkby Malzeard.

Many of the buildings in Hackfall were in a state of ruin and the pond (see picture above) has silted up and was very overgrown. A lottery grant has been used to much improve the paths, provide a car park, renovate buildings and grottoes and clear the pond and views.