Hack fall wood is an SSSI (Site of Special Scientific Interest). This could be thought of as a misnomer as what it really means is that Hack fall wood is a “natural heritage” site which deserves to be conserved for future generations. This sentence from the Natural England web site on SSSIs confirms this suggestion.

It is essential to conserve our remaining natural heritage for both current and future generations. Wildlife and geological features are under pressure from development, pollution, climate change and unsympathetic land management. SSSIs are important as they support plants and animals that find it more difficult to survive in the wider countryside.

Clearly this is a good thing but some of the reasons cited for making Hack Fall wood an SSSI are flawed. For example the citation says:

Two locally rare animals, Limax tenellus, a mollusc and a beetle Platycis minutus have been recorded in the site.

While Platycis minutus the red Net-winged Beetle may be “locally rare” it is common South of the Wash and across much of central Europe. In fact so common in some places that it forms swarms. 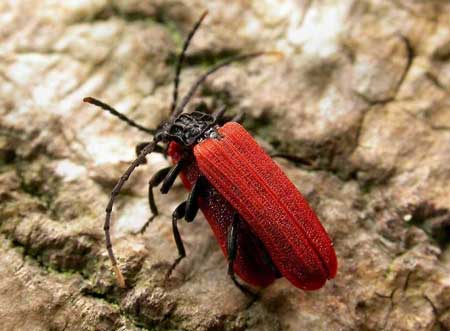 Thanks to Pauline Greenhalgh for permission to use her picture of Platycis minutus. You can see more of Pauline and Ian Greenhalgh’s superb wildlife pictures here

In fact the much of the wood was virtually clear felled in the early 1930s and this has resulted in some regeneration of native tress and in the undesirable colonisation by Sycamore. Note: Sycamore is an alien species thought to have been introduced to Scotland in the 15th century and the first reference to it in England was in 1574. It is a native European tree.

Having said all of that the protection provided by SSSI status is generally a very good thing for Hackfall. It means that experts from Natural England visit the site occasionally to check that there are no unwanted changes taking place. Permission is required for a long list of “Operations likely to damage the special interest”.

You can view reports here: Reports

And the original citation is here: Citation