The farmland above Hackfall has a soil formed from glacial till. Under this is a bed of Lower Brimham Grit, a strong sandstone that forms an exposed edge in places; large boulders of this material are found in the bottom of the valley, where they have rolled down the steep slope. 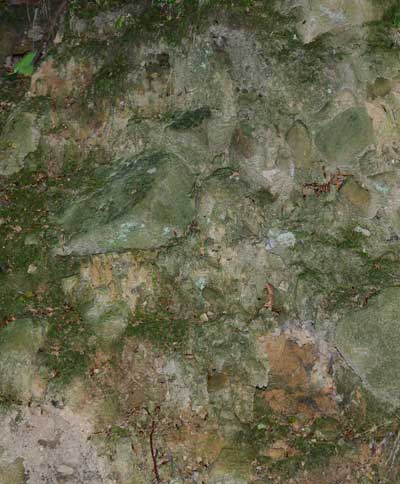 Below the Brimham Grit, a very steep slope has almost no exposures in a series of weak rocks that have weathered to a thick soil cover. These are a series of shales, mudstones and sandstones. Within the sequence, the Ure Shell Bed a bed of siltstone rich in marine fossils, and below it the Cayton Gill Shell Bed is a sandy and calcareous mudstone a few metres thick, also with many fossil shells. The latter is exposed at Agill (near Leighton Reservoir) and at Hartwith near Brimham Rocks, both less than 15 km away, and was first recorded on geological maps at Hackfall, but neither can now be seen in the steep slopes of the Hackfall valley. [The Proceedings of the Yorkshire Geological Society for 1965, have more detail on the local geology on pages 204-207.]

The vocabulary of the British Geological Survey describes the Cayton Gill Shell Bed as “Silty mudstone, calcareous and siliceous, shelly with beds of siltstone and sandstone.” and suggests that it is between 0 and 16M thick. 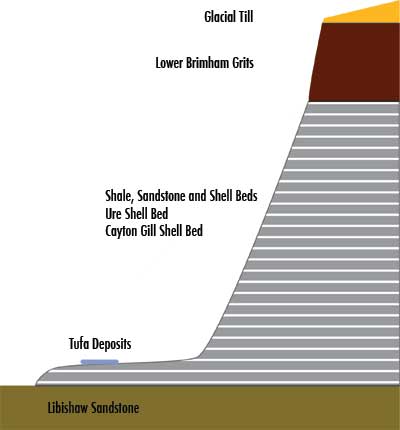 In thin section a specimen of the Ure Shell Bed is seen to be a grey siltstone composed of clastic quartz, flakes of muscovite, biotite and chlorite

…A related form occurs in the Ure Shell Bed, a marine band slightly higher than the Cayton Gill Shell Bed

Proceedings of the Yorkshire Geological Society 1965 204-206
The Cayton Gill Shell Bed was recorded for the first time on the six-inch maps at the rapids of Hack Fall.

The Agill Shale which overlies the Cayton Gill Shell Bed in Colsterdale, though not exposed, probably occurs at Hack Fall. The medium grained Agill Sandstone, as in Colsterdale, is coarser grained than the rock of the shell bed

In some areas there is a thin coal seam below the Ure Shell Bed, and locally there were coal workings at Coal Bank Wood to the south of Grewelthorpe; it is thought that coal was mined for a period in the southern end of Hackfall, hence “Coal Pits Walk”.

The bed of the River Ure is a sandstone, which is probably the fine-grained Libishaw Sandstone that once yielded excellent building stone from the quarries above Pateley Bridge. 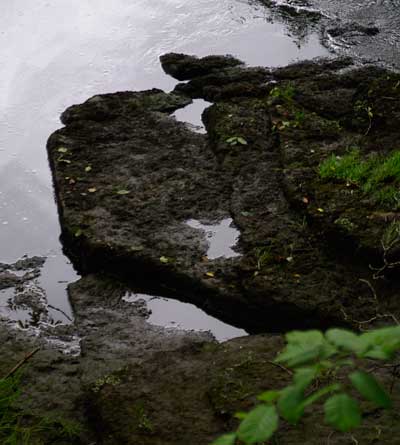 There are numerous springs in Hackfall, some of which yield water that is rich in calcium carbonate. Tufa deposits are associated with these springs, and there are also larger banks of older tufa that were deposited from springs that no longer flow. There is some evidence that there was a lime kiln at Limehouse Hill, and this may have used tufa as its raw. The source of the lime is a bit of a mystery; it may derive from a significant proportion of limestone debris within the glacial till, or alternatively from bands of limestone and calcareous mudstone within the main shale succession. It is known that geology that is contiguous with that at Hackfall in Colsterdale includes a thin limestone layer. 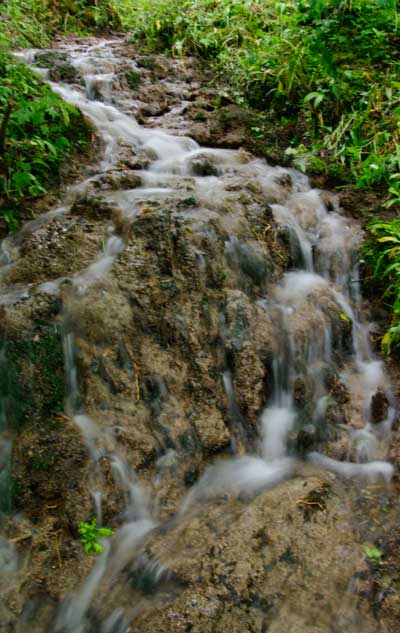 Thanks to Tony Waltham for suggestions which have improved this page significantly.