Hackfall is a place of surprises and as William Aislabie developed the site it is apparent that he added to the natural surprises with built and planted surprises of his own.

You have not the least intimation of a design upon you; nor any suggestion, that you are on high grounds; til the folding-doors of the building at Mowbray-point being thrown open, you are struck with one of the grandest, and most beautiful bursts of country, that the imagination can form.

Perhaps, by design, visitors were taken to Mowbray Point by a route from which the view was hidden. On arrival they would see a simple gothic building and inside a simple but elegant interior. Then the doors would be opened onto the terrace to provide a magnificent surprise. 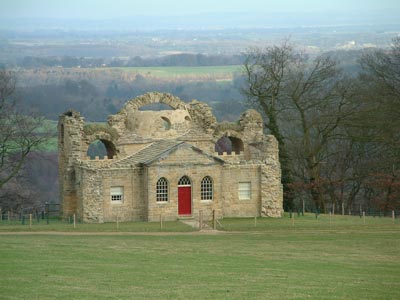 If the visitor then turned to look back at the building they would see a facade in the form of a mock Roman Ruin. The importance of this aspect of the building had been lost for generations until the Landmark Trust started evaluation work on the building. Their buildings archaeologist, Colin Briden, immediately recognised the building as reminiscent of a design by Robert Adam. The sketch “Capriccio on Ruins” is now at the V&A and shows a Roman fantasy building which is said to have been made up of elements from different buildings including a central dome based on Hadrian’s Baths and two side vaults based on sketches of ruined temples made by Adam when he was in Rome.