After almost 200 years Hackfall is once again graced by a magnificent fountain which can be seen from the terrace in front of the Banqueting House and from the Rustic Temple.

Visitors to Hackfall can now enjoy another of the splendours originally planned and created by William Aislabie. This project has come to fruition thanks to the enthusiastic work of a dedicated team of locals with the help of English Heritage and a Heritage Lottery Fund grant. 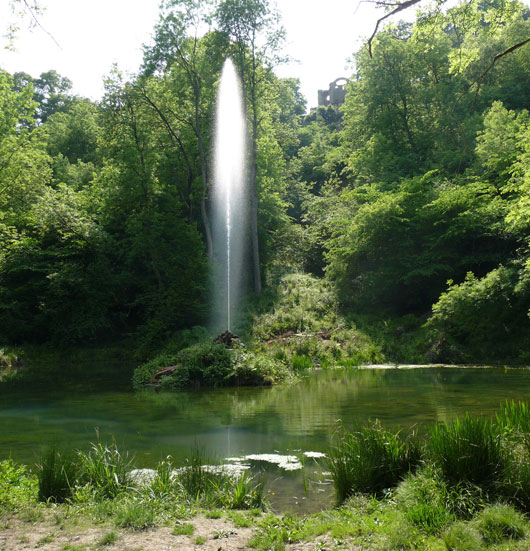 Fountain pond was originally created in 1756 as part of William Aislabie’s master plan to turn this beautiful woodland into a ‘picturesque’ garden landscape which became known as Hackfall. You can read more about the name here Hackfall

We know that the fountain had stopped working the early 1800s. This description from The Tourists Companion which was published in 1818 refers to the fountain which by then was not working. “a Rustic Temple, on the margin of a Sheet of water, in the middle of which there was formerly a Fountain throwing Water to a great height”.

James Ramsden tells us that the records of the Studley Royal Estate show that the fountain was regularly breaking down before this time and was possibly seen as something of a liability. More recent visitors to Hackfall would have seen that by 2007 the pond had become almost completely filled with silt and vegetation. In fact it was hard to see that there had been a pond here at all. When it was dredged, as part of the £1 million restoration project of Hackfall (funded by the Lottery Heritage Fund), sections of a pipe formed from hollowed elm logs was unearthed in very good condition for its age. Elm does not rot provided it remains wet.

A small island formed from tufa sits in the middle of the pond and the fountain used to throw water from the middle of this. Replacing the fountain became part of the dream for Hackfall Trust Chairman James Ramsden and Andrew Wimble the English Heritage Regional Landscape Architect. In order to realise the dream the decision was taken to create a modern pipe work and header tank. Hackfall is a site of special scientific interest as well as a garden of international importance and any work of this kind needs approval and has to be done with minimum disruption. The Woodland Trust and Hackfall Trust recruited a local team led by Kevin Ward to carefully hand dig a channel for a new alkathene water pipe and a hole for a 2500 litre plastic header tank. The site for the tank was carefully chosen to be both hidden from view and close to a spring which appears to run fairly consistently. 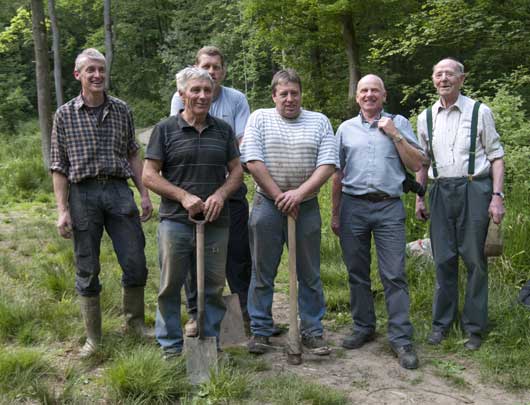 The control system installed by Keith Mott of Sleningford and Mr Ward’s team is beautifully simple. The header tank is filled from a spring and once a certain level is achieved a tumbler opens a valve and water flows. The tank is at a much higher level than the pond and this head of water pushes the fountain over 30 feet above the water surface. The fountain continues to flow for a couple of minutes until the lower level in the tank is reached when the valve shuts itself off. The tank then takes around 15 minutes to refill and the cycle repeats. 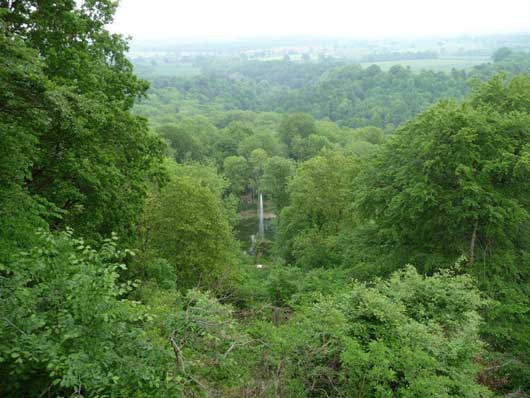 The fountain can be viewed from the Rustic Temple and also from the terrace in front of the Banqueting House at Mowbray Point (the restoration of which was also funded by a public grant). The terrace is open so that visitors can enjoy a beautiful view of Hackfall from 11AM until 3PM. Outside these times it is reserved for the exclusive use of residents of the Landmark Trust property which they rather oddly refer to as “The Ruin”.

It is impossible to keep this kind of thing a secret and a small group gathered to see the grand switch on of the fountain. 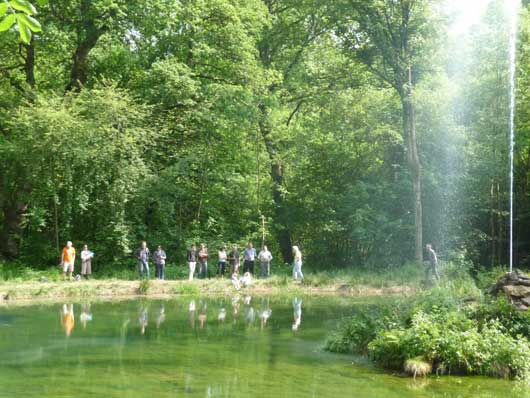