There is some debate as to whether Fisher’s Hall was named after William Aislabie’s head gardener William Fisher who would undoubtedly have been deeply involved in the construction of Hackfall or, because of its proximity to the river, it is a fishermans’ rest building.

The current thinking is that it was named after William Fisher. A recent article in Yorkshire Life states what most people think… “Deep within Hackfall Wood, Fisher’s Hall was built by William Aislabie in about 1750 and named after his head gardener.” 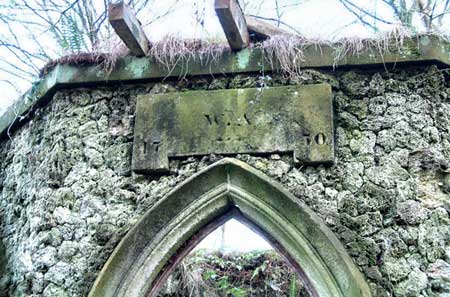 It is odd though, if this is the case, that the inscription over the door does not include the name or initials of William Fisher. I have set out some mentions and descriptions of Fishers Hall in early correspondence and diaries below.

In a letter from Porteus, Lambeth to Grantham 15 March 1773 (National Archives) the following mention of “Fishers” Hall appears.

To compleat the Romance we adjourned…to Hackfall, spent the day amidst all the Luxuries that Nature has so lavishly poured out upon that delicious retreat…whilst the Imagination…thus treated we did not forget to solace the animal part a little too at the Horse-Shoe Table in Fishers Hall … plentiful libations were poured out for your Health’s…we wished we could have conveyed a few of our Chrystal Streams, our impenetrable Shades & refreshing Breezes to the Scorching plains of St. Ildefonso”. 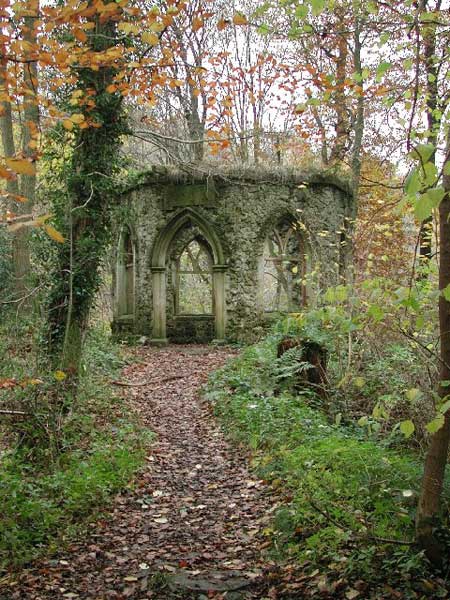 Fisher’s Hall in January 2006, © Peter Crump. Follow the link if you want to see more of Peter’s excellent photographs of Hackfall.

In British Angling Flies by Michael Theakston 1888 he clearly visited Hackfall on a fishing trip and describes the place but does not mention a building set aside for fishermen.

Following the course of the Yore, past Aldborough, we come to the magnificent grounds named “Hackfall,” the property of the Marquess of Bipon ; here the river, rushing through a rocky valley, surrounded by towering woods, presents a most tempting picture to the angler, rippling streams holding many a golden trout, quiet eddying flats on which the silvery grayling ever and anon glance up at the floating ephemerae, quaint miniature castles and grottos perched up here and there among the sylvan groves man’s efforts to enhance the beauties of nature what more can the most critical desire. In all my wanderings in search of my favourite sport, seldom have I met with such a lovely picture as can be met with here ; visitors are permitted to inspect the grounds on payment of one shilling each at the gates, but the fishing is preserved for the friends of the Marquess, although sometimes a ticket for a day may be procured for a friend by a resident in the district. From the lower boundary of Hackfall down to the village of Mickley …

We stayed with Aunt Jane Calverley, and we visited the famous Hackfall on Sunday afternoon as far as the Grotto Bay and Fisherman’s Hall, in fact to the gate at the far end of Hackfall on the footpath near the river. I also showed them round the Fisherman’s Hall and inside it too as the door was open, and we inspected the table and chairs etc.

This description from the Penny Magazine 1835 makes mention of the stone used to build Fisher’s Hall. In fact the petrified substance is tufa which may have been quarried locally when landscape features around the “Alum Springs” were being excavated.

… a winding walk, under a shade of lofty trees growing on a steep bank, conducts the spectator to Fisher’s Hall, a small octagon room built of petrified substances formed by several springs in the ground, and surrounded by hanging wood. At this spot two cascades are divided by a grove of fine trees. 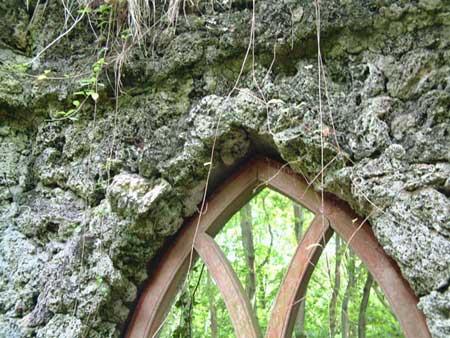 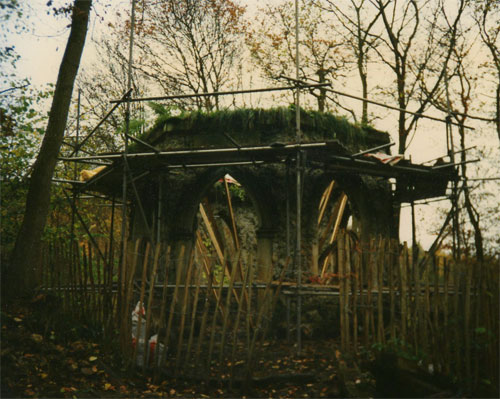 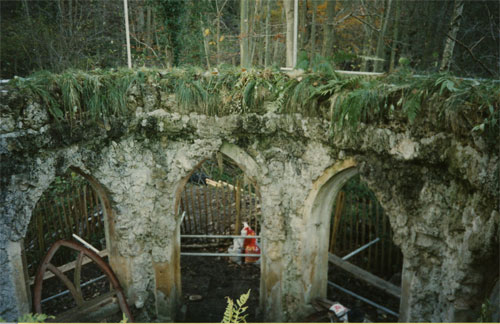